Beautiful little furball caterpillar, but what is it?
Location: Campbellton, N.B. Canada
September 9, 2011 4:01 pm
Admittedly I am scared of many insects but yet at the same time strangely compelled by their beauty. But I love this website and your dedication is amazing. This guy was found in northern New Brunswick, Canada the beginning of September. He almost looks like a bumble bee but we were curious what he is & what he might turn out to be. Here’s hoping you can help us out because I didn’t see anything on the first half of the pages. There’s also another one of something I saw hopping along the ground on what looked like a tail, he has a body that looks like a skinny slug,and he was found in Halifax, NS, Canada. First time seeing something like that, so got curious about that too.
Signature: Fraidy cat bug admirer 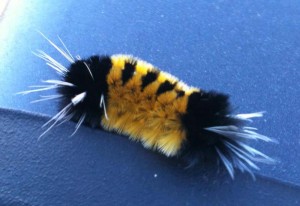 A Medley of Caterpillars