Tachinid Fly?
October 9, 2011
in paso robles yesterday, this very bristly, large beastie flew away from its mates on the coyote bush into the house. he was fearsome-looking, but didn’t mind being caught in a jar and released 🙂
this guy had definite orange spots. i looked him up in the book i have in paso robles, but forget its name  – the fly and the book…
clare. 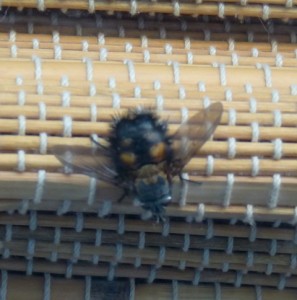 Ed. Note:  This came to Daniel’s personal email address from a close friend.  Here is some of the email chatter.

he looked big enough to parasitise anything his little heart desires!
i have only ever seen them in the fall… could that be?

ooh – yes, that’s him (her?).
Tachinid Fly – Paradejeania rutilioides
they were all over the baccharis.
it’s a lovely camera. but, the beast was inside the house and i was outside the window shooting thru not exactly recently-cleaned glass. further, the beast was high on the rolled up blind – and i was on my tiptoes – wobbling

Bee and 2 Flies from Peru