Subject: What is this black and white spider called?
Location: Sri Lanka, Colombo
December 10, 2012 1:45 am
Hi,
I found this black and white spider in my garden and I haven’t seen anything like this before. On the other side it looks the same but I think it had a small red dot as well. I have two small kids running around in the garden so I want to know what is this spider. What is this spider called and is it dangerous?
Thanks in advance,
Chanaka
Signature: Chanaka 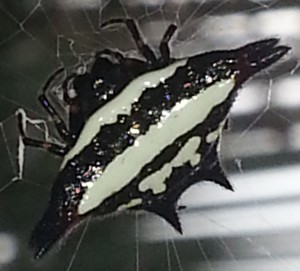 Dear Chanaka,
Except for the markings, this spider looks very much like the North American Crablike Spiny Orbweaver, Gasteracantha cancriformis, and we would bet it is in the same genus.  We quickly located it on the South Indian Spiders website where it is identified as Gasteracantha geminata,  and the following information is provided:  “This is one of the commonest spiders in Kerala, observed in almost all the districts of Kerala. They are characterized by the presence of hard shell like flattish bodies; and black and white transverse bands on the abdomen. The colouration and shell like body are thought to be providing protection to the spider. The abdomen has three pairs of long stout lateral spines or projections, these lateral spines are actually modified simple spines. Abdomen is also characterized by number of pit like depressions or sigilla. Typically these pits or imprints are dark coloured. They construct vertical orb webs, often in open spaces between the branches of tall shrubs. In its typical posture the front portion of abdomen covers the thoracic portion of cephalothorax and only the cephalic portion is visible from above. The genus Gasteracantha is widespread in the tropics.”  Another nice photo can be found on the GeoLocations website.

Hi Daniel,
Thank you for your reply and information. This helped me a lot. So this is a common spider and not a dangrous one, am I correct?
Regards,
Chanaka

Hi again Chanaka,
We cannot say for certain how common it is, but Orbweavers, including the Spiny Orbweavers, are not considered dangerous, though almost all spiders do possess venom.