Subject: what is this spider killer?
Location: perth western Australia
November 16, 2012 11:52 pm
Hi,
found this in our front garden it had just killed the spider. it was dragging it up our fence.
Could you please tell us what it is.
Signature: martyn white 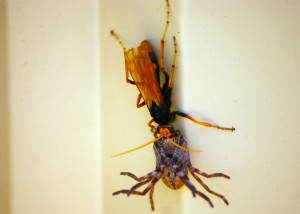 Hi Martyn,
On a regular basis, generally each year, we get at least on request to identify this spectacular Spider Wasp, Cryptocheilus bicolor, when it is photographed dragging a Huntsman Spider in Australia.  Only the female Spider Wasp hunts for Huntsman Spiders, and she does not do it to eat.  Rather she provisions a nest with paralyzed, but still living, spiders that provide a food source for her brood.  Dead spiders would quickly dry up and become inedible for the developing larva.  If the spider is merely paralyzed, it remains alive and the larva feeds on the nonvital organs first, ensuring the the meal will always remain fresh.  This same behavior is constant in Spider Wasps from around the world, regardless of the species.  The North American Tarantula Hawksare among the world’s largest Spider Wasps. 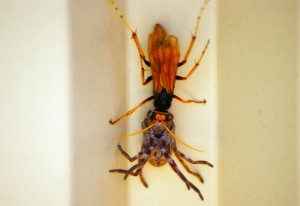 Hi,
Thank you being new to Australia I have just moved here from the uk, I thought it was an amazing thing to see.
Your site is amazing too, a real font of knowledge, I have sent a link to my son in the uk who loves this stuff.
Thanks again
Martyn