Subject: Tarantula hawk?
Location: Rauco, Maule, Chile
April 6, 2017 6:16 pm
I spotted this beautiful looking insect in my garden in central Chile today,
I’ve looked about online and it seems to look like a Tarantula hawk! wow. The only other pictures that look the same, with the metallic blue colour and orange anteni, were from Puerto Rico and Cosa Rica , so surprising to see one all the way down here.
Also, slightly concerning that when I saw it my puppy was playing with it, the sting being described as “like a lightning bolt struck the spot, the pain is beyong imagination” on a BBC article I read. Did my puppy have a lucky escape?
The picture isn’t great quality, sorry, but I thought it would be worth a look!
Signature: Tristan 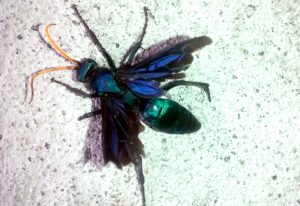 Dear Tristan,
Even before beginning any research, we are confident that this is a Spider Wasp in the family Pompilidae, the same family that includes Tarantula Hawks.  To Be Continued …

…  The image of a Tarantula Hawk with its prey from Chile posted on Birdspiders.com and taken by Arachnologist Rick C. West proves the genus Pepsis, the Tarantula Hawks, is represented in Chile.  Instagram also contains an image of Pepsis limbata from Chile, but both of those example are of orange winged Tarantula Hawks with black antennae.  A North American species pictured on BugGuide, Entypus fulvicornis, is colored like your individual.  Of the genus, BugGuide indicates:  “The genus is found practically transcontinentally but some species have restricted ranges”  and “Adults provision a pre-existing cavity or modification of a pre-existing cavity with a Lycosid spider.”  Since it preys upon Wolf Spiders, it is theoretically NOT a Tarantula Hawk, but of the genus Pepsis, BugGuide states:  “The related Spider Wasp genera, Hemipepsis and Entypus, are also quite large and can look very similar to Pepsis. These three genera are best distinguished by details of wing venation.”  BugGuide also has a nice comparison of the wing veination patterns of several genera in the tribe Pepsini.  If you still have the specimen, that comparison may help you identify the genus of your gorgeous Spider Wasp, that might be a Tarantula Hawk.  If your puppy captured this impressive Spider Wasp while it was alive, your puppy was indeed lucky to have avoided a sting.  The USU.edu site does have a Spider Wasp page with a listing of members of both the genus Pepsis and the genus Entypus from Chile.  We could not locate any images of Entypus lepeletieri online, and the other listed species is actually a subspecies, Entypus unifasciatus dumosus.   BugGuide does have images of orange tipped black winged Entypus unifasciatus, however the subspecies pictured are different than the subspecies found in Chile.  Insectoid lists 10 subspecies of Entypus unifasciatus, including E. unifasciatus dumosus, but there is no image available.  We believe we have exhausted our potential internet research at this time.

Thank you for the very informative reply.
I thought I saved it from my puppy, but perhaps it was the other way round.
I wish I kept it or got more photos, but it managed to fly away after multiple puppy pounces/nibbles. Spider wasps are certainly tough!