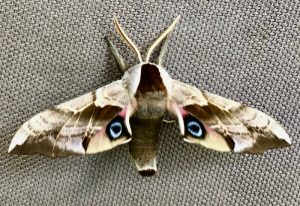 Dear Tom,
This Sphinx Moth is in the genus Smerinthus, and there are several similar looking members of the genus.  We believe your individual is Smerinthus ophthalmica because of your Central California location.  According to BugGuide:  “Smerinthus ophthalmica occurs from southern British Columbia and southern Alberta south to near the border with Mexico. It is replaced by S. cerisyi to the east and north, and S. saleceti in the southern-most Rocky Mountains and southern Arizona.”  According to the Sphingidae of the Americas site:  ” S. ophthalmica flies across southern British Columbia and southern Alberta into southwestern Saskatchewan.  In the United States it can be found in Washington, Oregon and northern and central California eastward into Idaho, western Montana, western Wyoming and northern Nevada and northern Utah.”

Large Elephant Hawkmoth from the UK