Subject: Poisonous?
Location: Dhahran, KSA
November 24, 2012 2:04 pm
Are these caterpillars poisonous? When i tried to remove one ’with a stick’ it tried to sting me with its ’horn/stinger!’ and squirted a green liquid!
My cat tried to eat one and it did this to him! Right between his eyes!! I would really like to know its name? If its poisonous or not? And if they are butterflies or moths?!
In the last picture: the yellow one is the one that tried to sting me and you can see traces of the green stuff that it squirted! It wasnt that yellow before i think it chaged colors!!
Signature: Dee 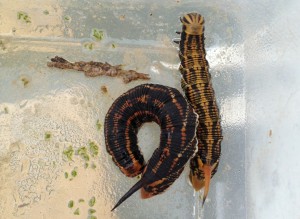 Dear Dee,
These are Sphinx Moth Caterpillars in the family Sphingidae, and they are frequently called Hornworms.  We know of no poisonous Hornworms, so our speculation is that they are harmless.  Many Sphinx Moth Caterpillars are edible, including a North American species that looks quite similar, the Whitelined Sphinx Caterpillar.  Hyles lineata. One Hornworm that just might be poisonous is the Oleander Hawkmoth Caterpillar which feeds on the leaves of the deadly oleander plant, and it might be able to sythesize the poison and make use of the toxin for protection. 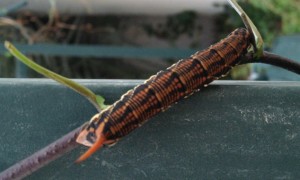