big white colorado caterpillar
Location:  fort collins, colorado
September 18, 2010 11:49 am
We found this rather large caterpillar half buried in sand. Both ends of him look like heads, but i believe that his head is the flat end. I couldn’t find him on your website, and we were wondering what he is. He is about three inches long.
Signature:  Thank you, Patrick 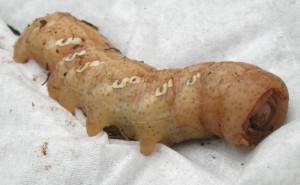 Hi Patrick,
We have tentatively identified your caterpillar as one of two possible species in the genus Eumorpha.  BugGuide has a photo that looks nearly identical, and it is identified as the Typhon Sphinx, Eumorpha typhon, but Bill Oehlke’s excellent Sphingidae website does not list the species in Colorado, though it is found in Arizona.  We needed to verify the location of Fort Collins on a map to see how close it is to Arizona, and we discovered is is in the north, not the southwest corner which would more thoroughly support our identification since insects really tend to ignore state and national borders.  The similar looking caterpillar of the Achemon Sphinx, Eumorpha achemon, is found in Colorado according to Bill Oehlke’s Sphingidae of the Americas website, and this species has a greater range.  So, though logic tells us that this must be the caterpillar of the Achemon Sphinx, we cannot totally disregard that it may be the Typhon Sphinx without contacting Bill Oehlke, so we are copying him to get his opinion.

Daniel,
It is Eumorpha achemon which is the only Eumorpha in North America that has the side panels appearing as if they are twisted dough (i.e. segmented but still continuous).
I will ask Patrick for a larger image and permission to post it to a webpage.
Bill Oehlke