Greetings from France
Trying to identify this little fellow, I explored your website and, need I say, enjoyed my tour immensely. A labour of love. A delight. I showed the photo at the Geneva Museum of Natural History (though I live in France, Geneva Switzerland is only a few kilometres away). It was identified as the fifth instar of Nezara viridula, the southern green stink bug, and I was given a handy link: http://creatures.ifas.ufl.edu /veg/bean/southern_green_stink_bug.htm where I read that it is a very common bug, in the US as well as in Europe and elsewhere. Best wishes,
(Mrs) Ira Gardner-Smith
France 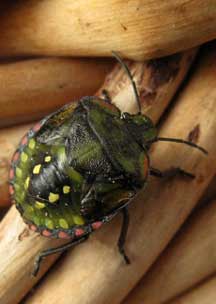 Dear Mrs Ira Gardner-Smith,
Thank you for submitting your wonderful image of an immature Southern Green Stink Bug. According to the Featured Creatures link you provided: “The southern green stink bug is believed to have originated in Ethiopia. Its distribution now includes Europe, Asia, Africa and North and South America. In the United States it is known to be found in the southern states of Virginia, Florida, Louisiana, Alabama, Mississippi, Georgia, California, Texas, and Hawaii.”