I hope you like identifying bugs!
What I’ve got is a fascinating flying dude. It’s totally black and about 1 inch in length with buggy eyes and a triangle head. New to me is that it actually looks at me (rather in my direction) when I move. I’m too used to houseflies that fly straight back into 8-week old spiderwebs after I (yes, I have an unexplainable fettish) untangle them from the web. Anyways, my concern is that it is dangerous in some way? At first I was convinced it had some diabolical reason for being in my house (mostly since it was so black and big!) but now I’m not so sure. However, appearances CAN be deceiving. I would love an I.D. for my lil’ buddy here, and perhaps some peace of mind.
Gratefully,
Rachel B. 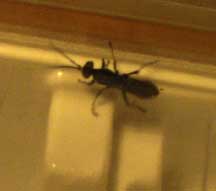 Hi Rachel,
You have a solitary wasp from the Sphecine Family. They are not aggressive.