Subject: Beetle or Spider?
Location: Magaliesburg mountain range, South Africa
January 14, 2013 4:34 pm
We found it in the middle of an open grassland on our hike in October. October is a Spring month in the Southern hemisphere
Signature: Emer Mae Butler 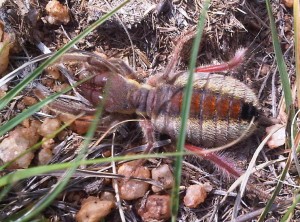 Dear Emer,
This is neither a beetle nor a spider.  It is a Solifugid, a member of the order Solifugae.  The Solifugae like spiders and scorpions are classified as Arachnids, however the Solifugids do not have venom, so they are not dangerous to humans, but they do have strong jaws that might inflict a painful bite.  The Agricultural Research Council has an extensive page on Solifugids of South Africa.  That site lists common names like Sun Spider, Wind Spider, “‘jaag’ or ‘jag spinnekop’ (wandering spiders), … romans, derived from the word ‘rooiman’ (red man) and ‘vetvreters’ (fat eaters). This is due to their feeding behaviour to gorge on available food, so much so that they can hardly move afterwards.”  Perhaps the best is this citation:  “Probably the most common name used throughout the country is ‘haarskeerders’ (hair cutters) or ‘baardskeerders’ (beard cutters). This is based on the belief that should a solifugid become entangled in a girl’s long hair, it will cut its way free. However, no scientific evidence exists to support this notion. Other speculations are that the hair is cut by females of some species to use as lining for their retreats. Some evidence for the latter has been found.”