Subject: Giant Spider
Location: North Scottsdale, Arizona
September 16, 2014 10:26 am
Can you tell me what this poor guy was? My neighbor found it in her garage, I wasn’t sure if it was dead or if it was poisonous, so I killed it (it was already dead.)
My friends have suggested a “Child of the Earth,” Hobo Spider or Solpugid? This was found in North Scottsdale where we’ve had record amounts of rain in the last few weeks.
What do you suggest we do if we find more, given that we’re expecting a lot more rain?
Thanks!
Signature: Becki 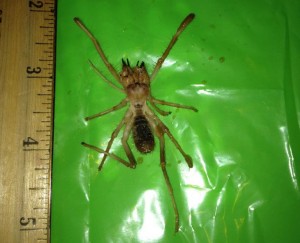 Dear Becki,
One of your friend’s suggestions is actually sort of correct.  Solpugid is a name that can still be found in literature, but it has fallen into disuse and has been replaced by Solifugid, a member of the order Solifugae, commonly called Sun Spider or Wind Scorpions.  Solifugids are Arachnids, but they are neither Spiders nor Scorpions, and unlike those orders of Arachnids, they do not have venom.

Testing the Literacy of a Solpugid

The Thing That Drives the Chief from His Chair: Chichotsa Mfumu from Malawi
Location: Scottsdale, Arizona