Soldier beetles are not pests and don’t cause any harm to us. But still, if you have a soldier beetle in the house and you want to get rid of it, here is what you can do about it.

Soldier beetles can be a blessing to your garden as they eliminate aphids and are excellent pollinators. These beetles look a lot like lightning bugs and wasps, even though they don’t have the ability to generate light.

But since they have a wasp and bee-like appearance, a big bunch of these insects flying near your house can look scary.

If you are looking for ways to get rid of soldier beetles from your home and garden, you have landed in the right spot.

Read the article to learn effective ways to keep these insects away from your home.

Are They Good or Bad For Gardens?

These beetles are extremely important for your garden as they mostly feed on nectar and pollens, which makes the adult soldier beetle a great pollinator.

Moreover, while feeding and mating, these insects cause no damage to the plants and flowers.

The soldier beetle larvae, on the hand, are also essential as it actively hunts and consumes aphids, soft-bodied insects, and other plant pests that can be lethal to your valuable plants.

Since they look a little similar to wasps and bees, many people think that they are harmful and will bite and sting.

This is totally wrong as adult beetles are harmless; they do not sting and are non-poisonous in nature. You can identify them by noticing the distinctive black spots on their bodies.

Where Can They Be Found?

Soldier beetles are widely spread throughout the globe. You can find different species in parts of Asia, Central America, North America, South America, and Oceania.

The lady beetle likes to lay their insect eggs in areas with moist soil or leaf litter.

You will mostly find these insects near a variety of flower beds, but during the winter, they can enter your house in search of warm spots to survive the cold weather.

If you take a look at the life cycle of soldier beetles, you will notice that they mostly appear during August and September.

How To Get Rid of Them

Since soldier beetle adults are beneficial insects and harmless, there is no need to take any drastic steps to get rid of them.

Just ignore these insects, and they will leave on their own.

However, if you don’t like the sight of these beetles swarming around your house and garden, use the following tips and tricks to keep them away.

Since there will be an abundance of food sources in a garden full of bright flowers and plants, it is the ideal location for soldier beetles to live.

If you have such plants and flowers, you must maintain the garden regularly to keep them away.

Consider pruning all the plants and keep removing the plant debris regularly. Also, do not overwater the plants, as they love to lay eggs in moist soil.

Seal up cracks around the house

During autumn and winter, the beetles will try to invade your house in search of a warm spot to survive the cold.

Since they are tiny, they usually enter through cracks, gaps, damaged vents, and damaged windows in the house.

Inspect your home to find these entry points and seal them properly.

Soldier beetles are hunted down by outdoor insects like spiders, assassin bugs, stink bugs, and more. Having a few in your garden will keep the soldier beetles away.

They are also hunted by lizards, birds, yard frogs, and more.

What are soldier beetles attracted to?

Soldier beetles are highly attracted to gardens that have a wide variety of brightly colored flowers. These flowers are great for obtaining nectar which they love to consume.
They also like moist soil to lay eggs. Since they actively consume pollen and nectar, they can be considered good pollinators.

Pyrethrin is a great insecticide that can instantly kill pets like beetles. This insecticide is produced from the chrysanthemum flower, and it directly attacks the nervous system of the beetles.
This results in a quick death. To get the best results, directly spray pyrethrin on the beetles.

Why are there soldier beetles in my house?

Soldier beetles are attracted to warm places during the winter. This is why a few of them might have entered your house in search of a cozy spot to spend the winters and survive the cold.
If you have fresh, brightly colored flowers inside as decorative pieces, these beetles will insanely be attracted to them.

What eats a soldier beetle?

Being tiny in size, soldier beetles are prey to different species, including lawn frogs, spiders, birds, bugs, pigeons, ants, and raccoons.
When in danger, these beetles secrete a chemical compound that makes them unappealing to predators.

Soldier beetles are beneficial for your garden, but the intimidating appearance can be a little too much to handle.

Adding to that, no one likes a big bunch of beetles buzzing around their house.

Therefore if you want to get rid of these beetles, take special care of your garden and keep it clean. You also must seal up the entry points that the insects can use to come into your house.

We hope the article was useful. Thank you for reading it.

Over the years, we have had many requests from worried readers who saw a big, wasp-like thing in their homes and weren’t sure what to do with it.

When we identified it as a soldier beetle, we would always let them know that it was a harmless bug that needed no treatment.

However, do go through the emails to understand why there might be some concern when you see these insects in your home or garden.

Boxer Beetle?
Hi there—here in California (Bay Area) I’ve always called this beetle a “boxer beetle” but can’t find anything under that name when I do an online search of your site or anywhere else. It has an orange body and black wings, and will spit out a bit of black “ink” when threatened. It also has a voracious appetite for aphids, and I would love to order a bunch for my roses and vegetable gardens. Can you give me the correct name, let me know if it causes any “pesky” problems, and if I can order them from anywhere? Thanks!!
Sonia Till

Hi Sonia,
This is a Soldier Beetle, possibly Podabrus pruinosus. To the best of our knowledge, they are not available commercially despite their excellent carvivorous behavior. 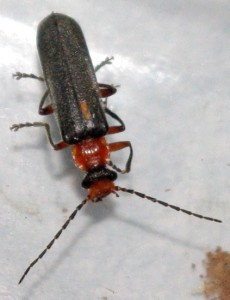 Intruder Alert! Thu, May 28, 2009 at 10:51 PM I found this guy skulking alone on my living room ceiling this evening. It was a very warm day out today, one of the warmest so far this year in Portland, Oregon. I don’t recognize him, nor to any of my friends. For the moment, I have him in a holding cell. If he turns out to be a harmless bug, I’ll just release him in the back yard and let him go on his way. If he’s one of those destructive pests, with other friends hiding out in the woodwork (so to speak), he will face summary execution. So, can you identify this invader? Paranoid Portland Home Owner Portland, Oregon Dear PPHO, This is a species of Soldier Beetle.  According to BugGuide, Soldier Beetle:  “Adults eat nectar, pollen and in some cases other insects, particularly aphids. Larvae are generally carnivorous and feed on small soft-bodied insects.  A few species feed on plant material such as grains potatoes and celery.   “We believe it is in the genus Cantharis which may be viewed on BugGuide.  The species Cantharis fidelis, which is reported from Oregon, looks quite similar to your beetle.  Soldier Beetles are often attracted to lights, which could explain the presence in your living room.  You may release your captive as it will not harm you nor your home. 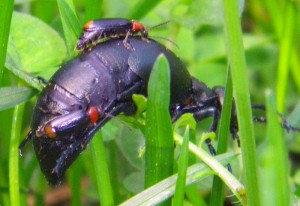 Beetle on lawn Location: Bowie, MD March 31, 2012 12:20 pm My daughter’s (besides being totally creeped out by them) would like to know what this was. Signature: Dan Delaney Dear Dan, The large beetle is a Blister Beetle called an Oil Beetle in the genus Meloe, most likely a female.  The smaller beetles are a different species, and we suspect they are not even in the Blister Beetle family.  Blister Beetles exude a compound known as cantharidin as a defense mechanism.  Chatharidin can cause blistering in skin.  The other beetles might be Soldier Beetles, and they do not have a chemical defense.  They might be harvesting the cantharidin to use since they cannot produce the compound.  We will keep trying to identify the other beetles. Update:  March 31, 2012 Thanks to a comment from Mike, we are happy to learn that these are most likely Fire Colored Beetles, though BugGuide does not provide any explanation for this behavior.  We also found a photo of Pedilus terminalus on Meloe posted to BugGuide and the behavior is explained here on BugGuide. 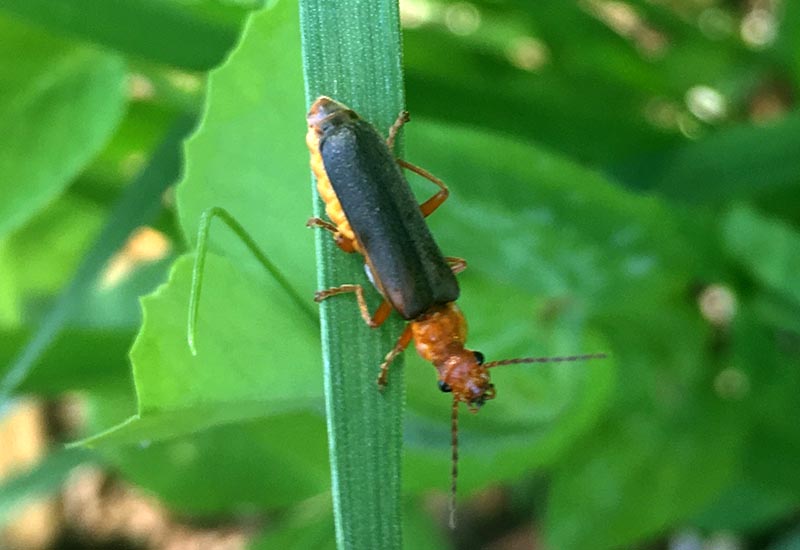 Subject:  some beetle?? Geographic location of the bug:  Bay Area, California Date: 04/17/2018 Time: 02:15 AM EDT Your letter to the bugman:  I found this bug on my peas and oats! Sorry for the bad picture. Is it a harmful insect that I should work to control? If so, how do I do so? Thank you!! How you want your letter signed:  Jayde Dear Jayde, This is a Soldier Beetle in the family Cantharidae, and according to iNaturalist, there are many species in California.  Your individual might be Podabrus pruinosus comes based on this BugGuide image.  According to BugGuide: “Adults eat nectar, pollen, other insects; larvae are fluid-feeding predators, feed on insect eggs and larvae” which means they are a beneficial family.