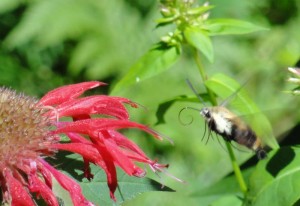 Hi Daniel,
Karen Thalin here, from Saxtons River, Vermont.
I JUST sent you a (two photo) submission on the web site of what I THINK is a Hummingbird Clearwing Moth, taken by me in my gardens yesterday. I was again looking through all my pix after hitting the “send” button, and realized that I had this one, which shows the color very well, even though the image is a bit blurry. This guy seems to be a little different than the HCM photos I’ve looked at on your site. It has bumble bee coloring. I’m not sending THIS email/photo to be published, but only to give you another view of the moth, if that will help with identifying it.
Thanks!
KT 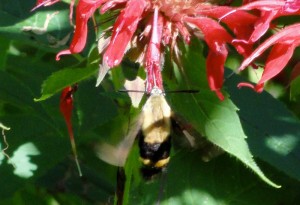 Hi Karen,
The best place to identify Sphinx Moths is on The Sphingidae of the Americas website because you can search by individual states.  There are three species of diurnal Sphinx Moths in the genus Hemaris listed for Vermont, and we believe you have photographed the Snowberry Clearwing or Bumblebee Moth, Hemaris diffinis.  The Hummingbird Clearwing is another member of the genus.  The Snowberry Clearwing is described on The Sphingidae of the Americas as being:  “a very variable species, but almost always the abdomen sports contrasting black and yellow hairs, the ventral surface being quite black. The legs also tend to be quite dark and there is a black mask running across the eye and along the sides of the thorax.”

Thank you, Daniel! It’s funny because after I sent this submission this morning, I saw a true Hummingbird Clearwing Moth in the same stand of bee balm! It was difficult to get a clear short, but this one is clearly very different than the Snowberry. I checked my photo against those on the site you recommended, and it certainly looks to be the HCM. They are found all along the east coast in way up into Canada.
Thanks, again.
Karen

Hi Karen,
We are happy you mentioned the Bee Balm, a species of Monarda, one of the best flowers to plant for both pollinating insects like butterflies and diurnal Sphinx Moths as well as real hummingbirds.