Bug On Thumb: A reader begins her own Bug Blog Luna Moth in West Virginia

Subject: Whirlabout or Sachem Grass Skipper
Location: Silver Springs, Florida
April 15, 2013 4:49 pm
Hi Bugman,
My 4-year-old and I are having loads of fun here in Ocala Florida with butterflies, but are having trouble identifying some of them. For this particular butterfly, I am not sure if it is a whirlabout grass skipper or a sachem grass skipper. Although after searching through the Bugguide I am leaning towards whirlabout because of the checkers on the underside of the wings and the black lines on the upper side of the wings. I don’t remember the way in which it flew but I would think I would notice if it whirled and think it a little odd. I found the skipper in Silver Springs State Park, Silver Springs, Florida down by the Silver River where the foliage is cabbage palm, grass, and oak (mainly cabbage palm and grass). It was probably midday, early April. I don’t actually see many grass skippers down there, mostly Satyr’s, Sulphur’s, and Buckeye’s. I hope this helps! Thank you for your time and all your hard work!
Signature: Kelly and Reuben 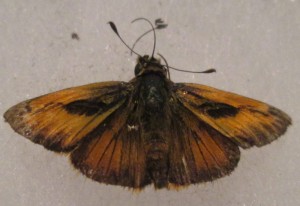 Dear Kelly and Reuben,
This is a very difficult response for us to write on so many levels.  First, we need to come clean and state we have a very difficult time identifying Skippers.  There are so many species that look so similar.  Both the Whirlabout Skipper, Polites vibex, which is pictured on BugGuide and the Sachems’s Grass Skipper, Atalopedes campestris, which is also pictured on BugGuide are in the same subfamily Herperiinae, as are numerous other Skippers which also look quite similar.  We rarely attempt to identify Skippers to the species level.  That is a job for experts and we are generalists here at What’s That Bug?
The really troubling part of our response deals with the location of the sighting, which is noted as Silver Springs State Park.  All plants and wildlife in State and National Parks are protected and cannot be hunted, trapped or collected.  They are there to be preserved.  We think it is wonderful that you and your four year old have found an activity that you can do together and which introduces your youngster to the wonders of nature, but this is also the time to enforce the importance of preservation.  As our population rises, open space is becoming more and more difficult to secure, especially in high density areas.  Even the most insignificant of creatures might fill a very important niche in the complex web of life in a specific ecosystem.  This is more than just our opinion as the creatures, plants and habitat of in our state and national parks are protected by law and hunting, trapping and collecting are illegal and breaking the law could result in a fine and citation, though we suspect that most rangers would warn you and not actually ticket you.
We have already breached the subject of Starting an Insect Collection not necessarily being Unnecessary Carnage when that collection contains the type of information that would be of scientific value.  Please understand that we remain conflicted on this subject, but we are quite firm on our stance of preservation within the park system.  Even scientists and museums must secure permission through a complex permit process prior to collecting from parks.
Please note that we have taken the liberty of removing your surname from this posting.  Please continue to nurture a love of nature in your youngster even if you consider our response to be harsh. 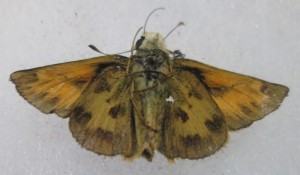 Dear Bugman,
Thank you so much for your thoughtful response. I have taken to heart your concerns and have found a public area in Florida that is actually open to bug collectors by the University of Florida’s Museum of Natural History so that we are no longer encouraging the breaking of laws, rules and mores. I honestly never knew that that’s what we had been doing and we had always been frank with the park rangers when we went in to the park about what we intended to do. They hadn’t said anything either. But now I know. Thank you for being honest with us! You have done a service to our nation’s parks.
Best,
Kelly

Thanks so much for writing back to us Kelly.  We really had been agonizing over posting your identification request because we did not want to alienate you in any way and we most certainly did not want to dampen the enthusiasm you and Reuben have for the wonders of nature.  We suspect the rangers did not see a family outing as any great threat to the survival of any endangered creatures.  We are happy to learn that you are able to continue your collecting at a sanctioned location.