Hi Clare,
Interestingly, when we searched BugGuide for the identity of this Skeletonizing Leaf Beetle, we discovered an image posted there that we also have on WTB?, but which has been unidentified.  The larvae of this beetle, Trirhabda flavolimbata, feed on the leaves of Baccharis.  We were uncertain if they were Sawfly Larvae or Leaf Beetle Larvae, and now we know that they are the latter.

Update: May 29, 2011 3:22 PM PST
In a moment of clarity, we realized all we need to do is to copy the previous posting onto the chronological end of this posting. 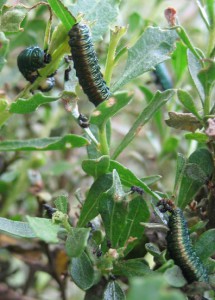 Hi John,
We will check with Eric Eaton, but we believe these are Sawflies and not Caterpillars. Sawflies are the larval form of a non-stinging member of the order of insects that includes ant, bees and wasps, Hymenoptera.

Update:
Daniel:
Hard to tell from the image, but either sawfly larvae or chrysomelid leaf beetle larvae.
Eric

Update: May 29, 2011
Upon searching for the identity of a Skeletonizing Leaf Beetle on BugGuide, we discovered that these are the larvae of Trirhabda flavolimbata.