Dear Bugman,
I attached a picture of a spider I found while cleaning a pond in my backyard in southwest Louisiana. I thought it was one of the most beautiful spiders I’d ever seen- kind of a mossy green with blue spots on its abdomen. I did some research and I’m pretty sure it’s a diving spider because I watched it go under a couple of times. At one point I think it even attacked a fish. Do you know the specific name for it and any more info?
Thanks,
Fran 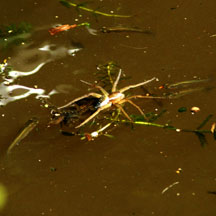 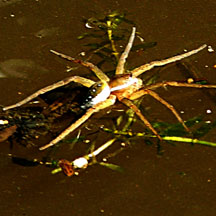 Hi Fran,
We are very excited by your letter and photo since the Six Spotted Fishing Spider is a new species for our site. Dolomedes triton is a beautiful spider and not easily confused with any other. It is greenish brown with silvery white lengthwise stripes along each side of the body. Abdomen has two rows of six white spots. It is found in slow moving streams and ponds. They eat small insects, tadpoles and fish. They are often found on water vegetation. According to Comstock: “This beautiful species is common in marshy places. It lives on plants over water, and dives freely when frightened, hiding under floating leaves. It is widely distributed, found in the east from New England to Texas, and is also known from across the northern part of the country in some of our western states and in Canada.”