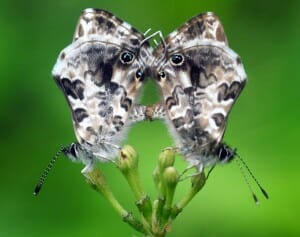 Daniel,
What caught my eye with these Cacyreus lingeus is that I also saw a pair mating, and after a bit of maneuvering and jostling about, they settled down into the one position for about 5 to 10 minutes or so, and the pattern of the “eyes” on the wings of the joined butterflies, as well as the final configuration of both showed a distinct mimicry of a jumping spider.
In the brief research that I have done, I have not seen anything written anywhere of two separate insects actually using mimicry as a defense mechanism before, although they were still for quite a while so were fair game without some defense system.
Have attached the photo to see what you think?

That is an awesome and astute observation Simon.  They really do look like the face of a Jumping Spider.  Perhaps it is time for you to write a paper.  We will be adding this photo to your original submission as well as making it a unique posting that is a feature.

Update:  May 20, 2015
A long time reader, Curious Girl, just forwarded us this link to the Days On The Claise blog with a very similar theory.