Blue and Red Spiked Caterpillar
Fri, Jan 16, 2009 at 8:39 PM
Blue and Red Spiked Caterpillar
While wandering along a wooded path in northern Idaho, I found this amazing looking caterpillar in the high bushes. The colorful red and blue spikes really make it stand out, but i have been unsuccessful in identification. It was mid August and i was along the mountainous shores of Pend Orielle Lake. Thanks for your help!
Sarah
Northern Idaho 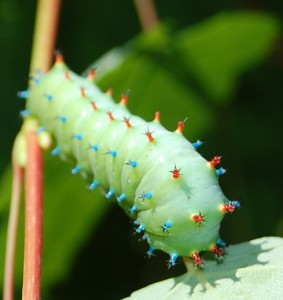 Hi Sarah,
Your caterpillar appears to be one of the earlier instars of a Silkmoth in the genus Hyalophora. Caterpillars molt four times, once between each of the five instars. The instars often look quite different, and many times field guides only hshow the final or firth instar. We believe this may be the third instar of either the Ceanothus Silkmoth, Hyalophora euryalus , or perhaps Glovers Silkmoth, Hyalophora columbia gloveri , or perhaps another species without a common name, Hyalophora kasloensis. All three are found in Idaho. We are going to contach Bill Oehlke to see if he can identify your caterpillar more exactly. He may want to know the exact county and date of the sighting.

Daniel,
It appears to be Hyalophora kasloensis which may be a self sustaining hybrid of H. euryalus and H. columbia gloveri.  Usually if all of the thoracic and abdominal tubercles are red, the insect gets classified as kasloensis, but could also just be a local race or variation of euryalus.  It is also possible that kasloensis is a valid species, not just a self sustaining (capable of reproduction) hybrid.  You could safely call it Hyalophora kasloensis
Bill Oehlke

Thanks Bill,
We considered Hyalaphora kasloensis as the most likely candidate by searching the listings for Idaho on the World’s Largest Saturniidae Site, the membership only website.  Readers may find out more about the site as well as seeing a photo of the adult moth by viewing the World’s Largest Saturniidae Site
Fifteen 2007 Individual Photo Finalists.