Subject: Big green caterpillar with yellow lines
Location: Mexico, Mexico
October 13, 2015 1:56 am
Hi, I recently discovered a small group of giant caterpillars on a neighboring tree. I researched a lot of days and I not identified the species yet. It’s green, very large and they have yellow lines… So, first I thought it was a Actias luna or but many features are different. I never seen a big caterpillar like this!
Info:
-Season: Autumn
-Size: 80 mm (Head to tail)
-Color: Green body with TWO different colors.
-Yellow lines on each segment.
-Yellow line along the abdomen, this divides the green color body. (Actias luna not split their colors).
-The spiracles are only above the yellow horizontal line.
-Green head and legs. (Actias luna generally has brown).
-4 abdominal prolegs plus anal proleg. No tail.
-Very small yellow knobs. No horns and spines.
Signature: Alfredo 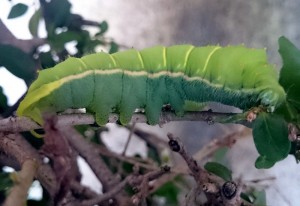 Dear Alfredo,
Mexico is a big country.  Can you be more specific as to the location?  This is a Giant Silkmoth Caterpillar and we found a matching image on the Silkmoths and more website that is identified as Rothschildia sandimasiana.  This information is supplied:  ” This Mexican species is almost never bred in captivity. Don’t know why. They are extremely easy under warm and very dry conditions.  I raised them on Prunus serotina. Most likely they will also accept Ligustrum and Ailanthus, possibly other typical Rothschildia food plants as well.”  When the adult moths emerged, this posting appeared on Silkmoths and more:  “There really isn’t much I can tell about Rothschildia sandimasiana. It is one of those recently described species. So far, sandimasiana is only mentioned from Mexico and may be restricted to the state Durango. However, many is still unknown, so the exact distribution of this species still needs to be established. The pupal stage didn’t take very long. After four to five weeks the moths emerged. Probably there are two to three flights a year, in captivity maybe four, depending on how the cocoons are stored. The moths are fairly large with a wingspan in between twelve and fourteen centimeter.”  We would not rule out that your caterpillars belong to a different species of moth from the same genus.  We will contact Bill Oehlke to see if he can provide an identification. 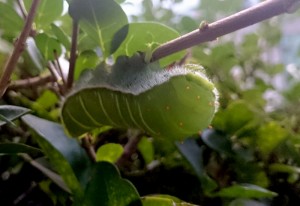 Hi Daniel. I’m in the State of Mexico, a few minutes from the Mexico City. Durango is one of the larger states and is 1200 km north. I located the address of their sighting (thanks Wikimedia) and the place is very rich in flora, while the place where I found them is a metropolitan area and the weather is unstable.
Yeah, looks like Rothschildia sandimasiana (Thank you so much! I was looking in the wrong place), but Rothschildia orizaba is incredibly similar. Rothschildia orizaba lives from Mexico to Panama, and apparently is endangered (and this worries me). It feeds mainly Schinus molle and nearby there is a park with lots of trees like this, but I never seen before (maybe they’re well camouflaged). Thank you very much for your help, maybe we can see moths soon if we are lucky. I’ll keep trying until identify them.
APF

Bill Oehlke provides his input.
Daniel,
I think it is more likely Rothschilida orizaba orizaba or Rothschildia peggyae, based on location. I think that sandimasiana is only known further to the north in Durango.
Many of the Rothschildia adults and larvae are quite similar.
Bill