Subject: Weird bug
Location: San Antonio, Texas
January 12, 2017 2:55 pm
Hello,
I found this slender yellow bug on my way to get the mail today. It has large blue eyes, long antennae, semi-long legs, and a long backside. Can you help me figure out what kind of bug this is? I’ve searched 10 websites and have not been able to figure it out!
Signature: Courtney Richardson 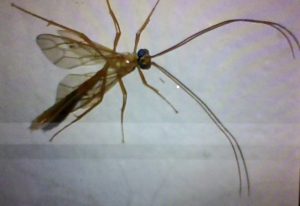 Stump Stabber stepped on in Denver!!!