Similar to Japanese Beetle in Size
July 13, 2009
This beetle is seen in my garden. It is similar in size to the Japanese beetle. I found this beetle on a grape leaf. It is mid-July and I have been seeing them for about a week.
Cathy
Nothern Westchester County, New York. 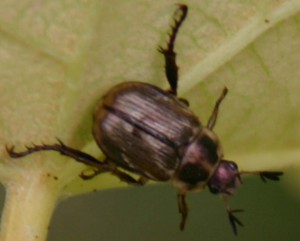 Hi Cathy,
Your beetle is a Shining Leaf Chafer in the same subfamily as the Japanese Beetle.  We believe it is in the genus Strigoderma based on images posted to BugGuide. Perhaps one of our readers can verify this.