Subject: What kind of spider?
Location: Eastern IA
October 21, 2015 7:56 pm
I know spiders aren’t “bugs,” but I see you’ve helped others identify their arachnids…wondering if you can help us with this one. My sister sent me these photos – this spider was found in eastern Iowa. We know it’s not a black widow or brown recluse, but any need to be worried about this one?
Thanks so much for your website – it’s been a great tool!
Signature: JP 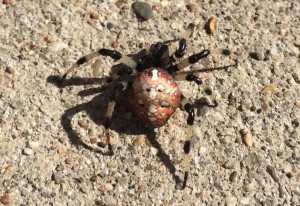 Dear JP,
This is a harmless Orbweaver spider, and we believe it is a Shamrock Orbweaver, Araneus trifolium, a member of a genus of spiders that live less than a year.  The spiders generally hatch in the spring and mature in the fall, when the attract the most attention because of their large webs and often colorful bodies.  Orbweavers respin their webs every day, and they are rarely found far from the webs, so we suspect something destroyed this lady’s web, forcing her to scuttle clumsily on the ground.