Search for Vinegaroon with good eyesight

Subject: Vinegaroon with better eyesight
Location: Doesn’t matter
January 10, 2016 10:42 am
Hello there.
I got a question for a very unusual reason. I’m currently writting a book were bugs of different kinds have a very large role.
Funny thing is that in this book the bugs will be both the heroes and the villains so it’s definitivly not about exterminating bugs.
Nothing like Starship Troopers or anything like that where bugs are massacred.
I’m looking for a type of vinegaroon with better eyesight. It doesn’t have to be fantastic, but it must be able to locate prey outside the range of it’s feeler antenna’s.
The size of the vinegaroon does not matter much. A picture and further information about this particular species of vinegaroon is very much appriciated.
Had to put some kind of picture in there so i just threw in whatever was closest to hand.
Yup. I’m seriously trying to become a writter which has been my ambition for more than half my life.
Signature: Regards Spleen the wannabe author 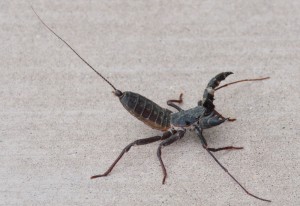 Giant Vinegaroon from our archives

Dear Spleen,
Since you did not supply an image, we delved into our archives for an especially nice image of a Giant Vinegaroon taken by Susan in New Mexico.  Our suspicions proved correct when we read this BugGuide statement:  “The vinegaroon is nocturnal and has poor vision. The whiplike tail is used as a sensory organ, as is the first pair of legs, which is not used for walking. Although its tail in unable to sting, this creature can spray an acidic mist from a scent gland at the base of the tail when disturbed. The spray is 85% concentrated acetic acid/vinegar, hence the common name “Vinegaroon.” The heavy pinching mouthparts (modified pedipalps) can also inflict a painful bite. Although very unlikely to attack humans, it can certainly defend itself if provoked.”  Tailless Whipscorpions in the order Amblypygi are also nocturnal hunters, and we presume also with poor eyesight.  We cannot provide you with any information on Vinegaroons with good eyesight, so you should probably find a better protagonist for your book.  We would suggest a Wolf Spider, and if you really want it to be fierce, make it a female Wolf Spider defending her brood.

Tailless Whipscorpion from the Philippines