Subject: In my garage!
Location: Simi Valley california
August 3, 2014 1:38 pm
My husband just found this DEAD scorpion in our garage! We live in Simi Valley and back up to a hill but want to make sure this thing isn’t poisonous!
What type of scorpion is this and is it poisonous for my family or animals?
Signature: Scared homeowner! 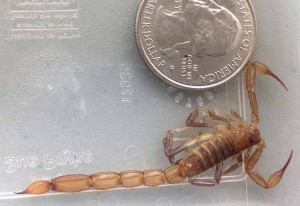 Dear Scared homeowner,
As you have noted, this is a Scorpion, and all Scorpions have venomous stings, but very few are truly dangerous.  It is our understanding that the Scorpions with the larger pinchers and thinner tails generally have the weaker and less toxic venom.  This appears to be a Stripe-Tailed Scorpion, Paruroctonus silvestrii, and according to Insect of the Los Angeles Basin by Charles Hogue:  The body and claws of this scorpion are slender, and it is medium sized (adults are up to 1 3/4 in., or 45mm, long).  … The species stings readily but without doing lasting harm.”  Of local Scorpions in general, Hogue writes:  “The stings of our scorpions usually cause only a local reaction similar to that of a bee sting, consisting of pain and burning sensation, with swelling that lasts from a few minutes to over an hour.  First-aid treatment involves immersing the affected area in ice water or applying an ice pack.  If symptoms persist, a physician should be consulted.”  This BugGuide posting, where it is called the California Common Scorpion, provides some anecdotal information.