Subject: Bordered Plant bug?
Location: San Juan del Sur, Nicaragua
July 8, 2012 3:50 pm
Hello Bugman!
I really tried to do as much research as possible on this one, but still not sure… Is this some kind of Bordered Plant bug? I haven’t found one with the head red as well as the border so not sure…
Thanks!
Signature: PunkRockGirl 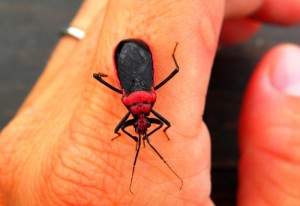 Hi Again PunkRockGirl,
We really have to get in the shower and go to a birthday party.  We believed this to be an Assassin Bug and not a Bordered Plant Bug.  We did a web search (google, not our site) of “ black red Assassin Bug Costa Rica” and found a really close match on the Normal Biology blog that was identified as Rhiginia cruciata.  No location was provided.  We often search Costa Rica for many Central American countries because there is better photo-documentation because there are more tourists going to Costa Rica.  Then searching that name, we found a BugGuide photo that looks really close, and BugGuide indicates the common name is the Scarlet Bordered Assassin Bug and provides this range information:  “Southeastern United States: New Jersey, south to Florida, west to Illinois, Texas.”  We know insects tend to ignore international boundaries, and many North American species are also found in Central America.  Gwannon.com indicates the range as:  “Costa Rica, Nicaragua, Panama”  Handle with care.  Assassin Bugs can deliver a painful bite.

Wow! Thanks! Assassin bug… I think I should get myself some gloves if I want to continue saving bugs from my pool without getting hurt 😉
Thanks again & have a great party! ;-p