Subject: Little green beetle
Location: South Australia
January 24, 2017 10:51 pm
Hi Bugman,
My name is Brooke. Today I found the cutest little beetle and after hours of failed research I couldn’t find the name! Please, do you know what bug this is?!
Signature: Curiouser and curiouser 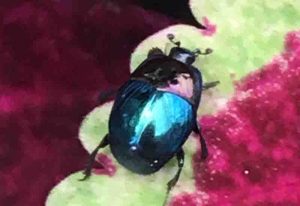 Dear Brooke,
Because of the general shape of the beetle, and especially the shape of the antennae, we are quite confident this is a Scarab Beetle in the family Scarabaeidae, but alas, we did not find any matching images on the Brisbane Insect website.  Perhaps one of our readers will have more luck than we have had with a species identification for you. 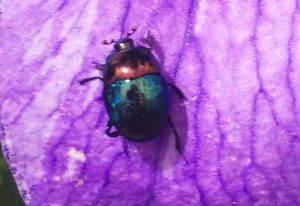 Correction:  Clown Beetle, NOT Scarab Beetle
Thanks to two readers who provided comments with corrections, we now know that this is a Clown Beetle in the genus Saprinus.  According to the Australian Museum site:  “Histerids are usually shiny black or metallic-green beetles with introverted heads. Carrion-feeding forms generally hide under a corpse during the daylight, and only become active at night when they enter the maggot-infested part of the corpse to capture and devour maggots. Like other beetles inhabiting carrion, they have fast larval development with only two larval stages.  Beetles of the genus Saprinus are among the first beetles to arrive at carrion. The adults feed on both the larvae and pupae of all species of blowfly, although they have a preference for fresh pupae. The adults lay their eggs in the corpse, and the larvae feed on blowfly pupae when they emerge.”  The Atlas of Living Australia has supporting imagery and a nice range map.

Long-Tailed Sawfly Larva from Australia
Tagged with → WTB? Down Under
Location: South Australia

4 Responses to Clown Beetle, NOT Scarab Beetle from Australia