Subject: Posing caterpillars
Location: Åland (western Finland)
July 12, 2012 3:21 pm
Came across these feeding caterpillars today. It is a new species to me and that rather odd pose is also a first as far as I am concerned. Each caterpillar is slightly less than an inch long. Any idea what they are?
Signature: Stefan 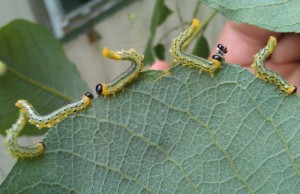 Hi Stefan,
Though they resemble caterpillars, these are actually the larvae of a Sawfly.  Sawflies are related to Bees and Wasps, but they do not sting.  Many have larvae that look like Caterpillars.  We tried a websearch for species found in Finland and quickly found this photo on PHotographers Direct that was identified as Croesus septentrionalis.  Searching that name, we found a wonderful blog entry on The Big Buzz.  The blogger thought she had this particular Sawfly, but the species she found in UK was eventually identified as the Berberis Sawfly.  She did provide this information:  “I opened my trusty Collins Complete British Insects and started looking. Aha – easy. There was a picture a gang of larvae identical to mine: Croesus septentrionalis. So, that was that.  Except of course that it wasn’t. When I went to bed that night thre was something niggling at the back of my mind. According to the Collins, Croesus septentrionalis, if disturbed, ‘raise their rear ends in unison’. Our larvae didn’t do this.”  Your photo shows these Sawfly Larvae raising their rear ends in unison, a behavior believe to discourage predators.