Subject: RE:
Location: Hernando County, FL
January 5, 2016 8:16 pm
Hi there,
This is just a reiteration of an earlier question you got that I also saw. I live about an hour north of Tampa, FL, and saw the same larvae as the one in this photo:
2014/02/11/orange-larvae-caterpillarf-sawflies/
I thought my photos would be a good complement to the others already provided and may help someone else seeking the ID of this bug. The larva moved quickly, but I did not find what they were feeding on. I found them in the vicinity of our cactus garden, but I found they were more on a piece of driftwood than any of the cacti. I only saw them crawling around at that one specific time and don’t believe I caught sight of any others in our garden after that encounter (but there were plenty during that encounter, crawling around quickly but aimlessly). Unfortunately, I did not get a photo of their prolegs that I can find.
This was in late January of last year (so approximately 1 year ago). I haven’t seen anything this year so far, though!
Thanks, and good luck fighting the good fight!
Signature: Fellow Buglover 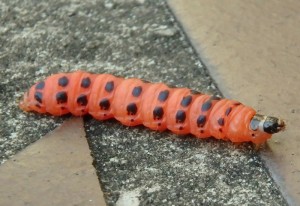 Dear Fellow Buglover,
Thanks for providing additional images similar to those from a previous posting.  We believe both examples are Sawfly Larvae, and both look very similar to this BugGuide image identified as being in the genus Arge.  Can you provide any information on the size of the individual? 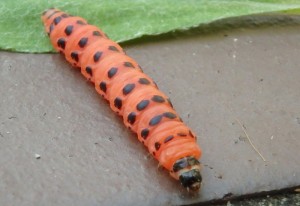 Update:  August 13, 2018
Carpenter Moth Caterpillar
Because of a new query we just received that we are researching, we now believe both this and an additional posting in our archives are Carpenter Moth larvae in the family Cossidae, but we are uncertain of the species since the larvae do not look like any posted to BugGuide., but they do resemble what has tentatively been identified as the Carpenter Moth Caterpillar Macrocassus toluminus from South Africa.

Update:  Tropical Cactus Borers
Ed. Note:  The following is a comment from Cesar Crash.
Those look like Lepidoptera. Found on a cactus garden, may be the cactus moth: https://www.ipmimages.org/browse/detail.cfm?imgnum=5015058 aka Tropical Cactus Borer https://bugguide.net/node/view/78959/bgpage

Thanks so much Cesar.  The mystery is finally solved.  Here is a nice BugGuide image of the caterpillar.  According to BugGuide:  “Imported to the Caribbean to control prickly pear cacti; arrived in the U.S. naturally or in cargo imported from the Caribbean (Johnson and Stiling 1998). Widely dist. in southern FL, spreading east along the Gulf Coast to New Orleans and north along the Atlantic Coast to SC.”  BugGuide also has this interesting statement:  “The moth has become a pest in se US.   This South American moth was introduced into Australia to control cacti, which are not native to that continent and which were becoming a very serious pest. It was so successful that memorials and monuments to it have been erected by grateful citizens there.”