What moth is this??
I was outside yesterday doing some stuff, when a leaf fell on me…well…I thought it was a leaf…I tried brushing it off of my flower decorated pants…it didn’t budge…still thinking this was a leaf, I picked it up, and realized within a mili-second that this was no ordinary leaf!! I am surprised that none of you heard the scream sent round the world…it was slimey and I have NO idea what this thing was…it looked like it was wearing military camouflage which is probably why it was attracted to my pants…trying to blend in, the slimy little bugger!! After coming into the house, shaking my hand, and going ‘ew ew ew ew ew ew ew’ the whole time, poor Jim got another earful about Florida bugs, and how in Philly bugs did NOT dress up in military fatigues to fool people like me~ I never had a prob with bugs…but I think the ones down here must’ve attatched themselves to the space shuttle when they were flying around in space, and fell off over Jacksonville! ACK!! It’s not a butterfly..it looks more like a Navy jet fighter!
Here’s some pics of this lovely creature..(NOT).. Do you have ANY idea what this thing is??
Valarie Weigle 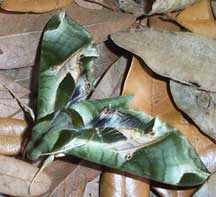 Hi Valarie
We are so sorry you were traumatized by your encounter with a Satellite Sphinx, Pholus satellitia, a color variation of the Pandora Sphinx. According to Holland: “This insect which is widely distributed throughout the eastern United States, and ranges northward into southern Canada, is well-known to all growers of vines.” The caterpillar, a hornworm, can do damage to the vineyard. I have no idea what the origin of the common name Satellite Sphinx refers to, but I like your theory about being dropped from space.