digging bee/wasp green stripes on back metalic green eyes
Sat, Jul 4, 2009 at 9:55 AM
Was hoping you could indentify these bees. there are at least 30 to 40 that just stared showing up and digging in our flowerbed.
act1guy
madera, CA (central valley) 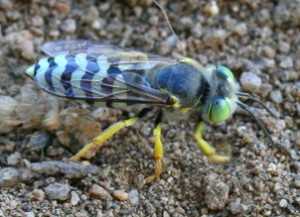 Dear act1guy,
This is a Sand Wasp in the genus Bembix.  We look forward to seeing these wasps each summer.  The two places in Los Angeles where we encounter them are in the Los Angeles River near the Glendale Narrows and near Union Station downtown at the freeway underpass when we walk to a film lab.  The Bembix Sand Wasps or Digger Wasps. according to Charles Hogue in his wonderful book Insects of the Los Angeles Basin, are:  “characteristic inhabitants of dry sandy areas such as beach bluffs and mesas, sand dunes and arroyos;  I have seen them working in the long jump pit on the track at the University of Southern California.  They fly low and rapidly over the ground seeking prey and tending their burrow nests.  The nests are shallow tubes running obliquely into the soil;  each contains a single larva, which the female keeps supplied with a diet of fresh flies and other insects.  In practicing this form of continuous provisioning of the larvae, sand wasps differ from spider wasps, mud daubers, and many other digging wasps, which provide only a single cache of food that must last throughout the larva’s development.  Sand wasps are not social insects, as are hornets and yellow jackets; yet, as a result of the tendency of individuals to nest in the same area, a type of colony develops.”  So, Sand Wasps help to eliminate an overabundance of flies which often plague us humans during the hot summer months.