Subject: My Grandfather infestation
Location: Guatemala, Villa Nueva
October 11, 2015 4:07 pm
Hi ,
I am currently staying in Guatemala while i was trimming roses something fell on me. At first glance i thought it was a spore but once I felt pain and a slight burning sensation I realized I was wrong. I found so many of these critters varying in sizes and they are always in groups . I just want to know if they are safe for my grandfather’s garden.
Signature: Crystal 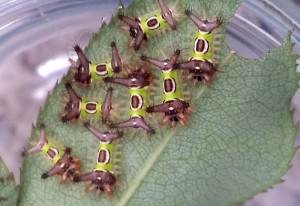 Dear Crystal,
These are either Saddleback Caterpillars, Acharia stimulea, which according to BugGuide ranges from “Massachusetts south to Florida and west to eastern Missouri and Texas,” or another member of the genus that ranges further South.  As you noted, they are capable of stinging, and according to BugGuide:  “Caterpillars are capable of inflicting lasting and painful stings with their spines,” however, the sting is not considered dangerous.  We suspect your grandfather is already aware of these Saddleback Caterpillars and their stinging potential. 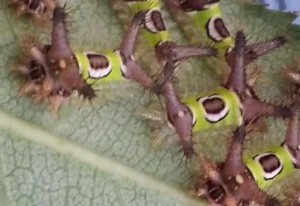