saddleback vs. inchworm
What a fantastic site you have! Love all of the photos. I have a bug behavior question for you and possibly a photo for your carnage page. Several days ago I found a saddleback caterpillar in my yard and put it (along with the weed it was on) into my 5 yr old’s bug house for observation. A few days later my friend brought over some basil from her yard and it had an inchworm on it, so feeling lucky to have a bug house in my kitchen, I put the worm and some of the basil in there with the saddleback. Things seemed fine for several days, then 2 days ago, I noticed that the saddleback was doing laps around and stinging the inchworm. Yesterday my 5 year old pointed out the fact the inchworm is now covered in a web-like pillow of some sort and is apparently dead. What did the saddleback do to the inchworm? Why? Can a saddleback produce a web-like substance? Also, how long before the saddleback metamorphasizes?
Donie
Birmingham, Alabama 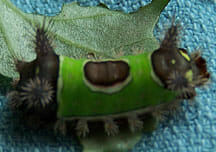 Hi Donie,
We find the behavior you describe utterly fantastic, and have no explanation. However, we feel you may have misinterpreted the situation. The inchworm you write about appears to be an Omniverous Green Looper, and it also appears to be in the pupal stage. We believe the caterpillar just pupated on its own, without any help from the Saddleback Caterpillar. Most caterpillars can spin silk. We are going to post your Saddleback Caterpillar, Sibine stimulea. The spines on this caterpillar are mildly poisonous and will sting.