frankenstein’s pet
September 12, 2009
I found this gal/fellow running in floppy circles around in a hole my turtle had dug days ago in the backyard, so it doesn’t seem likely that it can burrow or it would have done so to escape. It looks like it is a bad experiment in combining insect parts. It does not Look injured, but it Acts injured, or else just horribly, horribly clumsy. It keeps flopping over onto it’s back (a preferred position?) although it does not seem to be able to move around that way as some grubs do. It keeps assuming a posture with it’s rump raised, head bucked thorax up and head down, and little front four “arms” raised, hind legs down on the “knees” and the barbed feet raised. I guess this may be a defensive posture though it looks useless. It has very shiny black wi ngs (but doesn’t fly) and the rest is a somewhat velvety though not furry looking beige. Oh, and it is fairly aggressive as it ran at and bit a hapless worm sharing the container I first dumped it into… It made no attempt to cling on to or consume the worm so I think it was just acting out anger at being dumped into the pot. What is this critter?
ToadShade
Virginia, Prince William county 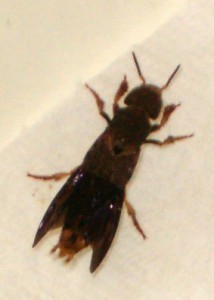 Dear ToadShade,
This is some species of Rove Beetle, possibly Platydracus maculosus.  According to BugGuide, it feeds on carrion.