Root Borer, but what species???

Dasymutilla magnifica? and two more.
Location: Monument Rock, CO, 80132
July 22, 2011 8:01 pm
The was just a little gal, but bigger than an ant and scurrying all over. I had to take 6 pictures to get a good (enough) one. I was tempted to pick up to make her slow down, but given the cow killer post, I’m glad I didn’t!
The second is some mating damsel flies?
The third is a stag beetle? I have never seen such a large flying insect – at least 1.5” without the enormous feelers.
Signature: Dr Lazer – lucky in Colorado 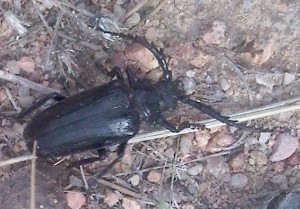 Dear Dr. Lazer,
Your three photos each represent such diverse insect families that we want to deal with them separately.  The beetle that you have mistaken for a Stag Beetle is actually a Prionid Root Borer.  We wish we could make out some details a little better.  At first we thought it might be a Palo Verde Root Borer (see BugGuide) but we have had second thoughts.  We believe this may be Prionus heroicus, which we also found on BugGuide.  The spines on the thorax and the legs both match, but even more importantly, we can only count ten antennae segments and that seems to agree with the image on bugguide.  We researched your location and we know Monument Rock is in central Colorado, and BugGuide lists sightings of Prionus heroicus from Arizona and Utah, which is causing us some doubts.  We will try to contact Eric Eaton to see if he can provide us with confirmation or a correction.

Eric Eaton confirms genus, but not species
Daniel:
There are several species of Prionus in Colorado and it would take too much time for me to go through the research on this.  Some characters needed for ID might not even be visible in the image.  Sorry.
Eric

Thank you so much for your time and effort. You guys obviously do a labor of love of insects and bugs.
I’m attaching a second picture that is head on for antennae detail but don’t feel compelled to spend too much time unless you want to 🙂
This guy when he flies is slightly smaller than a hummingbird since he’s got carapace, wings, legs, and antennae all extended.
And, yes, monument rock is in scrub oak forest at the foot of the front range, 7000′ fasl, west of Monument, CO.
David 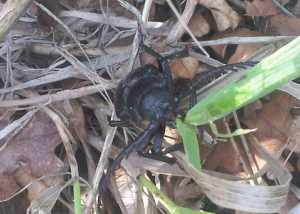 Genus Prionus, but what species???

4 Responses to Root Borer, but what species???