Subject: What is this?
Location: Lynwood Calfornia
August 17, 2014 7:16 pm
Can you help me identify this bug? I found him outside my door step
Signature: Not sure 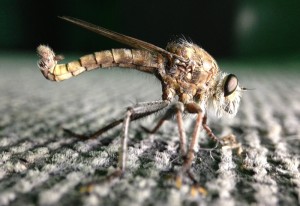 Dear Not sure,
This is a Robber Fly in the genus Efferia, and though we went through numerous images on BugGuide, we could not find any that have the exact coloration of your individual.  You can compare your image to this image on BugGuide to see that the general physiology is the same.  According to BugGuide, there are:  “110 spp. in our area,” and “in our area, the vast majority are restricted to sw. US, with some widely western spp. and just two widespread spp.”  According to Eric Eaton, male Robber Flies in the genus Efferia:  “have the bulbous claspers, making them reasonably easy to identify.”  Just as we were about to post, we discovered this image of Efferia antiochi on Sardis & Stamm about the Antioch Dunes National Wildlife Refuge that looks identical to your Robber Fly.  According to the California Department of Fish and Game:  “Known only from Antioch, Fresno, and Scout Island in the San Joaquin River” which would indicate it is not the same species, but is sure looks close. 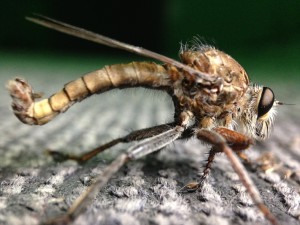 We would strongly suggest that you contact the Los Angeles County Museum of Natural History as this might be a significant find. 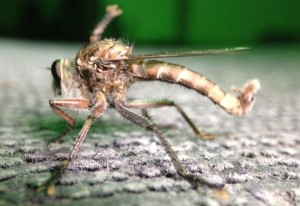