Subject: Dragonfly eating a bee?
Location: Austin, tx
August 16, 2014 8:49 pm
Hi Bugman!
Found this dragonfly looking insect sucking down a bee in my back yard. Is it a dragonfly? It was definitely drinking the bee. Craziest thing. I have a giant oregano patch bit flower right now and the bees love it. We have a pool so sometimes see dragonflies, but this had some odd features I’d never seen on a dragonfly, like a clear abdomen and a feathery black tuft at the end of his backside. What’s that bug?
Laura
Austin, TX
Signature: Laura 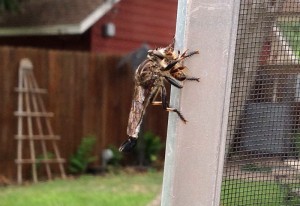 Hi Laura,
You are mistaken in thinking that this is a Dragonfly, though like a Dragonfly, this Robber Fly is an adept predator capable of capturing large prey on the wing.  We believe we have correctly identified your Robber Fly as a member of the genus Efferia due to its resemblance to many members in the genus, including this unidentified species that is pictured on BugGuide.  According to BugGuide, there are “110 spp. in our area” and “in our area, the vast majority are restricted to sw. US, with some widely western spp. and just two widespread spp..”  We interpret that to mean that many species are very limited in their distribution.  Alas, we haven’t the necessary skills to attempt a species identification.