Rhinoceros beetle?
Hi What’s That Bug,
Enclosed are four images, of two beetles we found in our garden (South East Australia) this morning. The first (beetle1 and beetle2)was rescued from drowning in a pet’s water bowl – there have been a few unfortunate fatalities of that nature, recently. It had rather powerful legs, digging between our fingers, and was squeaking quite loudly. The second beetle (rhinobeetle1 and rhinobeetle2) was found meandering across the front garden. I’ve never seen anything like it in this area, and am at a loss to identify it. (The Googled images of rhinoceros beetles don’t quite fit for this little guy.) It was a lot more placid than the first beetle, and only squeaked when he was put back down. Both were returned to the relative safety of the area we found them. Thanks for any information you might be able to provide on their identification, and I hope the images are of use!
Jennifer 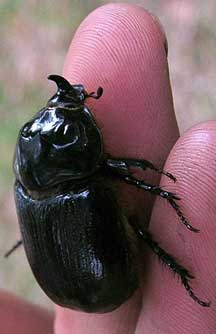 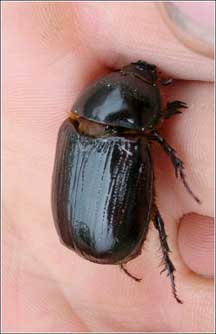 Hi Jennifer,
We believe your Rhino Beetles are Dasygnathus trituberculatus as identified on the Geocities site. Furthermore, we believe your other beetle might be a female which lacks the horns. 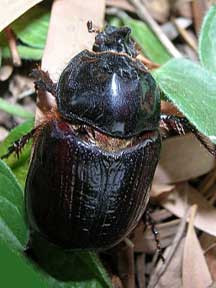 Fiddler Beetle from Australia
Tagged with → WTB? Down Under

3 Responses to Rhinoceros Beetle from Australia