Red Admiral from the UK

Subject: Red Admiral Butterfly
Location: Lancashire, UK
August 4, 2015 5:20 am
Hey Bugman,
found this beautiful butterfly (which I believe is a Red Admiral) yesterday while I was out running. It seemed very docile and only flew off when I moved in closer, was in the same spot when I was on the way back. ^^ Just thought I’d submit it. 🙂
Signature: Hope you like. Jordan. 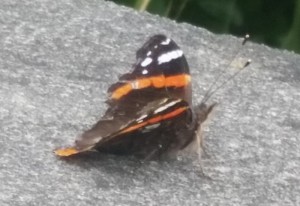 Dear Jordan,
Though we are quite aware that the Red Admiral is found throughout the northern hemisphere, most of the images on our site are from North America, so your UK submission is a great addition to our site.  According to UK Butterflies:  “The Red Admiral is a frequent visitor to gardens throughout the British Isles and one of our most well-known butterflies. This butterfly is unmistakable, with the velvety black wings intersected by striking red bands.  This butterfly is primarily a migrant to our shores, although sightings of individuals and immature stages in the first few months of the year, especially in the south of England, mean that this butterfly is now considered resident. This resident population is considered to only be a small fraction of the population seen in the British Isles, which gets topped up every year with migrants arriving in May and June that originate in central Europe. Unfortunately, most individuals are unable to survive our winter, especially in the cooler regions of the British Isles.  The number of adults seen in any one year is therefore dependent on the number of migrants reaching the British Isles and numbers fluctuate as a result. In some years this butterfly can be widespread and common, in others rather local and scarce.”