Mystery Beetle with Cute Antennae
Could you identify this beetle that I found in our backyard this morning? I am attaching a picture – the antennae are so unusual – and I have to say it – cute. We live in Pembroke Pines, FL – south Florida just south of Ft. Lauderdale. 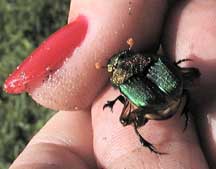 Dear Suze,
I must say I admire that you polish your nails before digging in the dirt. You have a magnificent photograph of a female Rainbow Scarab, Phanaues vindex, which is relatively common in Florida. These are scarab beetles further classified as Dung Beetles or Tumblebugs. The male Rainbow Scarab has a single long curved horn which arises from his head. These insects are unusual in that they work in pairs, rolling a ball of animal dung which is buried with a single egg. The dung is the food source for the developing grub. They are important in that they help clear away and break down the animal excrement, making for a more beautiful environment as well as more fertile soil. This type of beetle is the scarab of Egyptian heiroglyphics and jewelry. The ancient Egyptians were fascinated by the appearance of the beetles rolling a ball of dung in the sand and likened the ball to the orb of the sun.