Webspinner Drawing of a Robber Fly, we presume

Iridescent Rhino Horn Bug in upstate New York
Location: Hudson, New York
August 7, 2011 4:42 pm
I found this on my back steps here in upstate New York.
I can’t find it on the internet.
What is it?
Is it out of it’s normal range?
Where does it usually live?
Signature: Rob 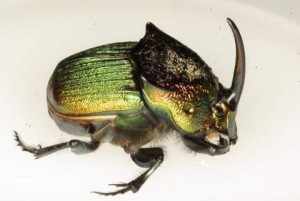 Hi Rob,
This beautiful beetle is a Dung Beetle commonly called a Rainbow Scarab, Phanaeus vindex.  Only the male has a horn.  Dung Beetles often work in pairs collecting dung and rolling it into a ball to be buried after laying a single egg.  The Dung provides food for the larva.  According to BugGuide, this is the range of the Rainbow Scarab:  “Mexico; USA: Alabama, Arizona, Arkansas, Colorado, Connecticut, Florida, Georgia, Illinois, Indiana, Iowa, Kansas, Kentucky, Louisiana, Maryland, Massachusetts, Michigan, Mississippi, Missouri, Nebraska, New Jersey, New York, North Carolina, Ohio, Oklahoma, Pennsylvania, South Carolina, Tennessee, Texas, Vermont, Virginia, West Virginia, Wyoming.”
Hi Dan,
Thanks for the ID.
Is it indigenous to upstate NY?  If not where is it common?
Thanks,
Rob

Though we do get more reports from the southern states, New York is well within the range of the Rainbow Scarab.  Only the males have horns.