Giant beetle creature! Whazzit??
Hi there. Your site is really fantastic! While flyfishing the other day (northern California area), I came across several of these HUGE beetles. Some were swimming (rather pathetically). They have wings of a sort but it seemed to never occur to them to fly. Any clue on its ID? Thanks much!
Michelle Mahood 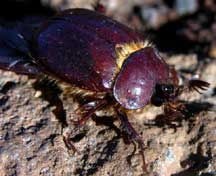 Hi Michelle,
You have a photo of a Rain Beetle, Pleocoma species, one of the Scarab Beetle Family. According to our favorite expert Hogue: “The first measurable late fall or winter rains stimulate the adult males of this genus to emerge from their subterranean burrows, in which they have lain as pupae for more than a month. In some species a soaking rain of several inches is needed to initiate activity, but the species found at higher elevations will often fly a few minutes after the onset of the year’s first shower. In the foothill and canyon areas, the males seem to emerge in response to the rain and may be attracted to light, congregating around store fronts or dwellings during a drizzle or downpour. When searching for the burrows of the flightless female beetles, the males fly in slow sweeping patterns low over the ground and brush. … The females are seldom found outside their burrows, which may extend from 4 to 6 feet into the soil. The male apparently locates the burrow of the female by detecting a strong [musky] scent that she puts into the air. He enters her burrow to copulate, after which the female plugs the burrow’s opening with pulverized soil and digs deep in the ground. The eggs, which are laid in a spiral at the base of the burrow and packed tightly in fine soil, do not mature until the following spring or early summer. … The life cycle may last as long as ten or twelve years, with the larvae feeding on the roots of varied kinds of plants, usually hardwood shrubs or trees and in particular oaks and conifers. The mouthparts of the adults are atrophied and useless for feeding.” Your beetles were not swimming, but probably just bumbled into the stream. Thanks for a new addition to our site.

Ed. Note: We received this letter shortly after posting the Rain Beetle photo.
Rain Beetles Hello: I am a biologist studying rain beetles in California, and came across the posting of the rain beetle on your website. I would be very interested in finding out the exact locality where the beetle was seen. Would it be possible for you to contact the woman who posted the picture and question and either give her my email to contact? Thanks! -Ian
We forwarded Ian’s letter to Michelle who wrote back to us:
Thanks for passing my email along. I heard from Ian last night and sent him some whopping big high-res photos of the rain beetle — even the underside. How cool that someone is studying them! Thanks again for ID’ing my bug. You guys are EXTREMELY COOL. Best regards, Michelle

Ed. Note: We just got this letter.
(08/09/2005) identifications Hello – I was recently shown your site, and it is excellent. My specialization is longhorned beetles, and in cruising around I notice a number of incomplete or uncertain IDs for this family. I don’t know if you are interested in receiving this sort of input, but if you are, I offer the following additions to your identifications.
The Northern California Pleocoma species sent by Michelle Mahood is undescribed, having been incorrectly recorded in older literature as P. simi, which is found in southern Oregon, and closely resembles Michelle’s beetle. The species shown in the photo occurs around the Lake Shasta basin, most often in Douglas Fir and Incense cedar forest. I will be described in my upcoming revision of the genus Pleocoma.
Keep up the good work. You are a valuable resource.
Cheers Frank Hovore