rain beetle
Thanks so your great site that my husband found-we ID’d the rain beetle! My husband was sitting on the couch reading on an early dark morning ( I had just gone outside and left the door open) and INCOMING INCOMING a giant slow-moving buzzy creature came motoring toward my husbands head! He ducked and ran in the corner waiting for it to land so I could catch it and and put it outside it as I do spiders and bugs. We thought it was an amazing bug with cool appendages. My question-are the larvae harmful to tree roots-or is it a symbiotic relationship? Also, is the guy still studying them (from your website 2004)? We heard they are common here in Paradise, CA. Here are my photos.
Dawn 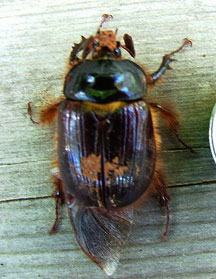 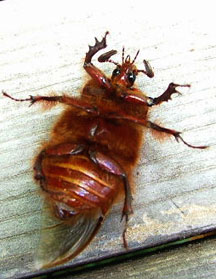 Hi Dawn,
We are so excited to get your photos of this fascinating beetle. To the best of our knowledge, there is no current study. We checked with Eric Eaton and here is what he has to add: “In answer to Dawn’s question: These beetles are almost never numerous enough to do damage to trees, though it is not a symbiotic relationship (the larvae EAT the roots!). She should count herself lucky to see one. The different species seem to have very localized distributions. We had them in Oregon, but not in my local neighborhood. I also do not get up nearly early enough to see them:-) Ha! Morning people…. Just to add to the rain beetle thing. The ones you see are all males. Females are flightless and call the males to their burrow entrances with a pheromone. Females are substantially bulkier than males, too. Eric”