On December 13, 2016 · Category: Longhorn Beetles Tagged With: WTB? Down Under · Add Comment

Subject: Big beetle id please
Location: Lake Macquarie NSW
December 12, 2016 8:52 pm
Hi, I’ve seen this beetle today for the first time, although my partner says he has seen it on the tree before. I have never seen one like it. It’s very big, about 60mm and appears to have been living on a sawn off palm trunk. I’m at Wyee Point, in the Lake Macquarie region of NSW. We have a lot of Eucalypts around.
Just wondering if it’s something that’s going to attack the timber in my home?
Thanks very much
Heather
Signature: Regards. 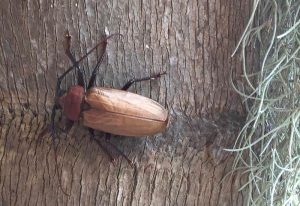 Dear Heather,
This Longicorn is a Prionid in the subfamily Prioninae, and just last month we identified a submission (and corrected a misidentified submission from our archive) as Agrianome spinicollis.  Longicorns are members of the family Cerambycidae, and they are also known as Longhorned Borer Beetles because they have larvae that bore in wood, generally living or recently dead trees.  Milled lumber is generally safe from infestation, however, it appears that your deck is surrounding a standing trunk.  Beetles in this family are usually host specific, and not general feeders.  According to the Queensland Museum site:  “This species is found in rainforest and open forest in eastern Australia. It is common in Queensland and New South Wales and also occurs on Lord Howe Island. The larvae are huge white grubs found in rotten wood, especially dead Poinciana or fig trees. It is an important pest of pecan trees. The large adults sometimes blunder into house lights.” 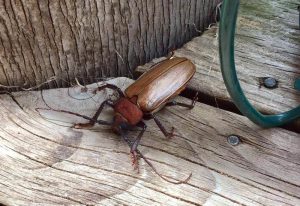 Thank you,
we’ve relocated the beetle into the bush. The trunk (a palm) in the deck is not live, so I’m watching it for larvae. There are numerous holes in it, so it seems the beetle made a home there.
Have a nice Christmas and new year!