Subject: Praying mantis eats giant asain hornet
Location: In Asia.
February 11, 2017 4:06 pm
Last July me and my bros were playing video games and when we came outside to chill out a hornet flew in our home!. Then when we were
Trying to swat the wasp with our ps4 controller he flew in to this manties territory and he captured it with ease. So I took some photos.
Then at the end it was decapation.
Signature: Imb 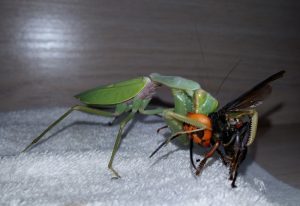 Dear Imb,
We love your images of an Asian Mantis feeding on an Asian Hornet, however we do have a few questions we hope you are able to answer.  Asia is a huge continent.  Are you able to provide a city or country?  You indicated that the hornet flew into your home and that it flew into the mantid’s territory.  Was the mantis a pet?  Thanks for your contribution and your clarification of our questions. 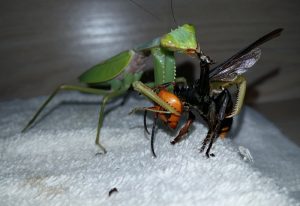 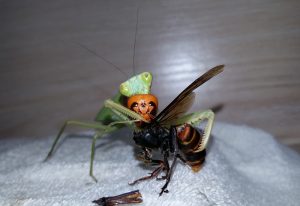