Subject: Potter wasp and Gulf Fritillaries on Passion Flower vine
Location: Tucson, AZ
September 22, 2012 12:56 am
Good evening!
I thought you might enjoy these photos of some of the many visitors to my passion flower vines. In the first photo you’ll see a pretty little potter wasp constructing her nurseries. Any idea what species she is?
The second photo I like to call ”synchronized chrysalis exiting competition”. I’m fairly certain my 4 vines are responsible for about 90% of the population of Gulf Fritillaries in Tucson. I’ve had so many caterpillars my poor vines are barely clinging to life. Do you think the potter could be using the smaller caterpillars to feed her young? It would be great to get some natural crowd control.
I’ve also seen several tiny lacewing larvae on the vines, carrying around bunches of junk (and ant bodies) on their backs for camouflage- I was able to identify them using your site. They’re so cool, but my camera’s not sophisticate enough to get a good shot.
Love your site!
Signature: Emily 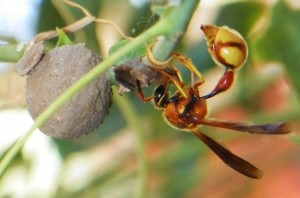 Hi Emily,
This is a beautiful Potter Wasp and your photo is exquisite.  One of the closest color matches we could find on BugGuide is Dolichodynerus tanynotus, but alas, there is no species information.  There is a single submission from San Diego.  Further research on bugGuide makes us inclined to speculate that this is actually Eumenes bollii, which appears darker than your individual, however, the markings appear very similar, especially this image from San Diego.  The BugGuide genus page for Eumenes states:  “Females make a pot of clay as a nest, provision with moth and beetle larvae. Wasp places eggs on wall of cell, then provisions” though we would not discount the possibility that your individual is provisioning her nest with Gulf Fritillary Caterpillars, especially since the subfamily page on BugGuide indicates:  “Most provision with caterpillars.”  Thank you for proposing such an interesting hypothesis.  Though there is no actual documentation, we are taking creative license and tagging this as a Food Chain possibility.

Daniel,
Thanks so much for replying to my letter. I think you nailed it with the Eumenes bollii identification, the photos on BugGuide look just like her. I’ve always wondered what sort of organs/tissues run through that tiny wasp waist from the body that keep the abdomen alive…
Thanks again,
Emily