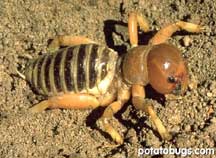 I recently moved to Los Angeles, and last night I found the biggest, scariest bug I’ve ever seen in my apt. It looked somewhat like an ant on steroids, but it looked a little like a beetle, too. I thought it might be one of the "wind scorpions" you mentioned elsewhere on the site, but the photos don’t seem to match up. The bug’s body and legs weren’t quite as long as the scorpions.
This bug was about 1 1/2 inches long, about 1 inch wide. It had six very thick legs (thicker than any legs I’ve ever seen on a bug, and so thick I wouldn’t find it difficult to believe it was a baby animal). The bug was mostly flesh-colored, except the abdomen was black, with rings around it. Can you help me identify it? I am so scared I’m going to see another one of these things in my place. I want to make sure that it won’t hurt me or my cat.
Thank you,
Michele

Dear Michele,
You found a potato bug or Jerusalem cricket ( Family Stenopelmatidae) and they do tend to startle people. They are burrowing relatives of true crickets, and sometimes go by the Spanish name Niños de la Tierra or Children of the Earth. They are nocturnal, and live in the soil. Though they can bite with considerable force, they are not harmful.