Strange Bug in New Mexico
Location: Albuquerque, NM.. 1 mile from Rio Grande
July 2, 2011 11:36 am
We were on a walk and came across this giant 6-legged bug. It’s an orange yellow with black striped on the (rear?) section of its body. The bug was almost 1.5” long and fat. On the rear were two vertical (straight up) antenni looking things. On the front(?) appeared to be an eye (big black dot).. but couldn’t see if there were two. Touching it with a stick, it wasn’t interested in moving. We took two pics.
Signature: Abby & Gracie Slentz 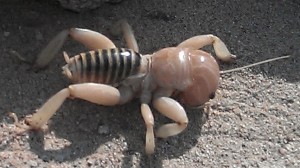 Hi Abby & Gracie,
This is a Potato Bug or Jerusalem Cricket, and it is one of our Top 10 identification requests, though for Southern California, it just may be #1.

Thank you so much for your response!  We went back to where we had found him and brought him home.  We took him to our local science museum and they were thrilled to get him!  He told us he was a “baby faced grasshopper” (and there was some language barrier there), but we were so happy that they wanted him.
Thanks for your time.
Abby and Gracie

Hi again Abby and Gracie,
In Spanish, the Potato Bug is Niño de le Tierra, or Child of the Earth, and in Navajo it is called a Skull Insect.  The humanoid appearance cannot be denied.