Subject: VI Mystery Moth
Location: Vancouver Island, British Columbia
June 29, 2012 6:48 pm
Dear ID Team,
I photographed this guy (gender evident from his feathery antennae) on June 27, 2012 in the Comox Valley. An unusual visitor, his delta shape and folded leaf appearance struck me as fascinating. I estimate his size to have been roughly 2cm in length from antennae tip to wing tip at rest.
Signature: Sandy 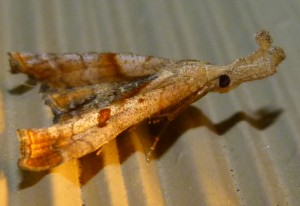 Hi Sandy,
We believe this might be a Snout Moth in the family Crambidae.  We searched BugGuide with no luck at determining its identity, so we are posting this as unidentified in the hope that one of our readers will be able to supply us with a species name. 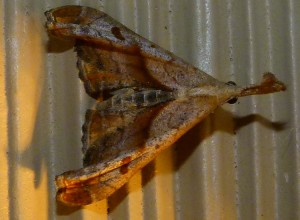 Karl provides an identification
Hi Daniel and Sandy:
I believe it is an Owlet Moth (family Noctuidae) in the genus Palthis, probably P. angulalis, the Dark-spotted Palthis. If you are looking for it on the Bugguide site, they have adopted a newer classification system which includes a major overhaul of the superfamily Noctuoidea. In this system this moth is placed in the family Erebidae, subfamily Herminiinae, the Litter Moths. Most references suggest that the Dark-spotted Palthis is a moth of eastern North America but in Canada the range is given as Newfoundland to British Columbia. The Bugguide provides at least one example from British Columbia. Regards.  Karl