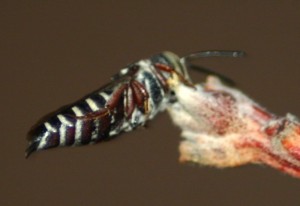 Bees doing a dance on dead apple tree branch
Location: Henderson, NV (Near Black Mountain)
July 18, 2011 11:42 pm
We had two little bees (around 1.5-2.0 cm) doing a dance on a dead branch of an Apple tree around sunset today (July 18) One bee would grab hold of the end of the branch with its Mandibles and front legs, fold its wings, and stretch out the back legs straight. When the second bee flew around, the first would arch its back up for a little until the second would land, then fly off.
I looked through this site and http://bugguide.net/ – but couldn’t quite classify it, maybe a Mining Bee?
Signature: Dan 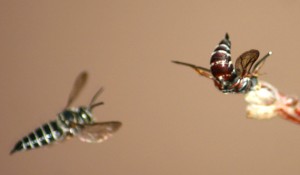 Hi Dan,
First, we must compliment you on an awesome series of photos of what we believe to be some species of Sand Wasp in the tribe Bembicini (see BugGuide) engaging in what appears to be a courting and mating “dance”.  We are going to try to enlist the assistance of Eric Eaton to confirm our identification and perhaps to provide more specificity. 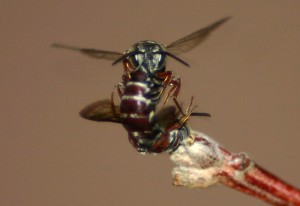 Eric Eaton provides a correction
Daniel:
These are actually cuckoo leafcutter bees in the genus Coelioxys.  They are both females.  The first image shows one in its “sleeping” posture, gripping the bud with its jaws.  I think the second specimen wanted to displace the first one since good sleeping quarters are in short supply (?).  So, it is a battle, not mating 🙂
Coelioxys are kleptoparasites of leafcutter bees in the genus Megachile.  The female Coelioxys lays her egg in the nest of her host.  The larva that hatches then eats (steals) the pollen and nectar stored by the host bee.
Eric